We are starting a series of articles on the longest checkmates in DTM metric. We should note from the very beginning that longest mates in 7-man endings almost always break the 50-move rule used in over-the-board chess. Research shows that this rule puts serious constrains on chess theory. There are positions with established mates after more than 500 moves without any captures or pawn moves. This is why we will completely ignore the 50-move rule here.

This article, the first in the series, covers the KRBN-KQN (King, Rook, Bishop and Knight against King, Queen and Knight) ending and its derivates.

We will mostly use this kind of abbreviation to denote endings, where P stands for Pawn, N - kNight, B - Bishop, R - Rook, Q - Queen, K - King. We will also omit the king in full notation, but will include K in the abbreviated one.

1. KRBN-KQN. Rook, Bishop and Knight against Queen and Knight. Mate in 545.

This is the position with the longest mate for this ending. Even though Black is to move, it won't save him. 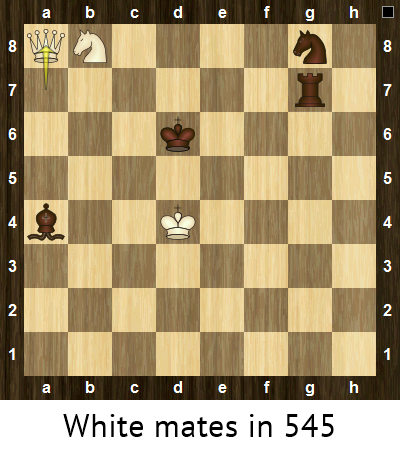 A human player has no chance to solve this problem. Even the best chess programs can't find the winning solution, even though they guess most moves right.

Don't panic if you can't understand a thing in this solution. Top chess players admit that they fail to grasp the logic behind the first 400 moves. Note that there are no captures until move 523 (523...Qxb3).

This mate is the longest one in pawnless endings - other mates are far behind in complexity. This can be explained by the balance of piece values: 11 against 12 - the advantage is minimal. We should also note that in the ending closest to this one by complexity - KRBN-KQB (Rook, Bishop and Knight against Queen and Bishop) the longest mate is much shorter and is won by the side with more pieces, not the queen.

Interestingly, this position was found as far back as in 2007 by Yakov Konoval and Mark Burzhinskiy as a candidate for the longest mate position, but they couldn't calculate the exact distance to the longest mate. We managed to confirm the result and find the solution in 2009, while testing the program that calculated the Lomonosov Tablebases. But it is not the longst mate - it is only on 4th place among the longest mate endings.

A simple idea one has when he sees the position above is whether it is possible to take a 7-man position with a pawn, to promote the pawn in several moves and get mate in 545, thus finding an even longer mate. It took a long time to get this question answered. This is because generating pawn endings is much more difficult than generating pawnless endings - with pawn endings, you must first generate the so-called minor endings that you go to when pieces get captured or pawns get promoted. For a computer program generating endgame tablebases the most difficult ending is KPPP-KPP, because to generate it the program must first calculate all other endings with 4 pieces on one side and 3 pieces on the other. This is not only a problem of calculating power but also one of storing and organizing enormous amount of data. This is why getting the pawn endings took 3 more years, and why some sources still claim that the longest known 7-man mate is mate in 545. 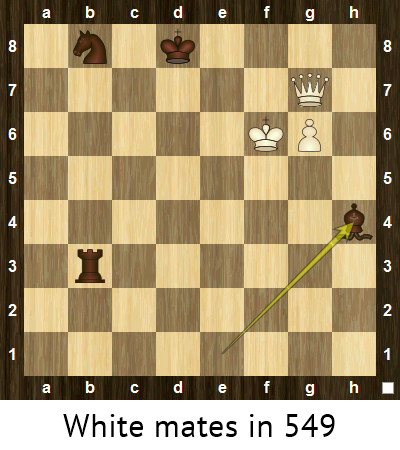 A peculiar thing in this position is the pawn promoting to knight instead of queen on the 6th move - to check the black king and avoid losing the queen. 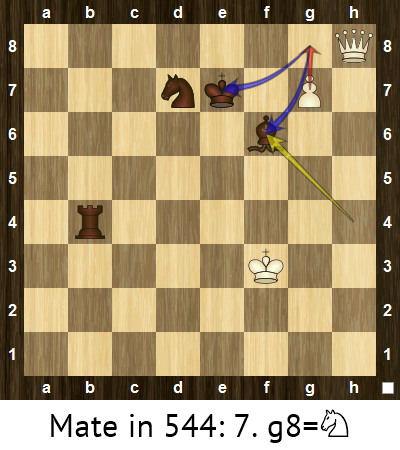 After this move, we get the already familiar KRBN-KQN ending. Again, we won't fid the solution here unless we use the tablebases.

3. KRBN-KNP. Rook, Bishop and Knight against Knight and pawn. Mate in 546 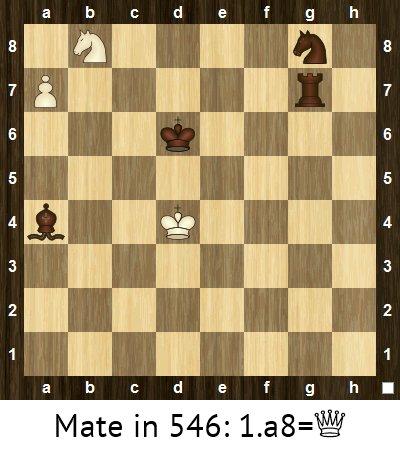 It is easy to notice that this position is almost the same as the one given in the beginning of this article, where the pawn has already promoted to a queen.

2 pawns can beat 3 black pieces, but to get the longest mate, one must be promoted to a queen, and the other to a knigth - this brings us back to the KRBN-KQN ending. This is the 2nd longest mate. 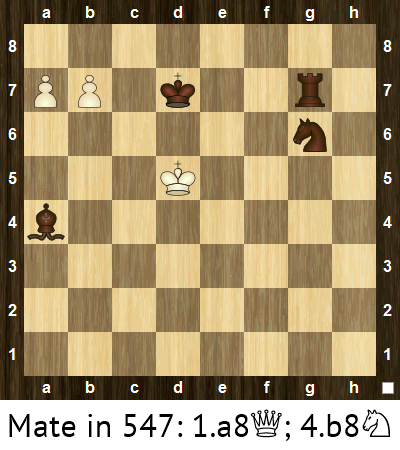 There are 4 more endings that turn into KRBN-KQN after some time. 3 of them have mates in more than 500 moves, and the KRBP-KPP ending already falls far behind, with some measly 476 moves before mate. 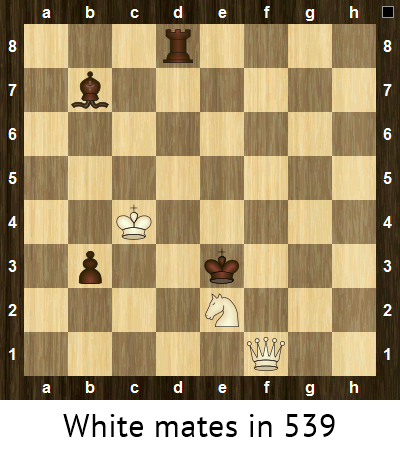 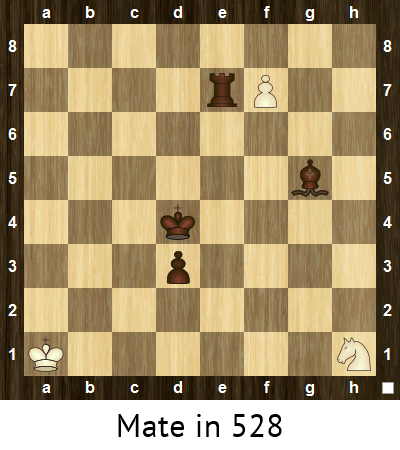 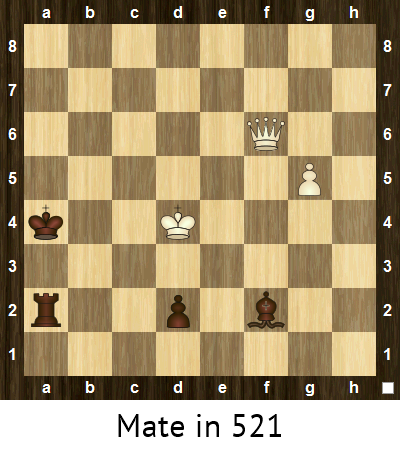 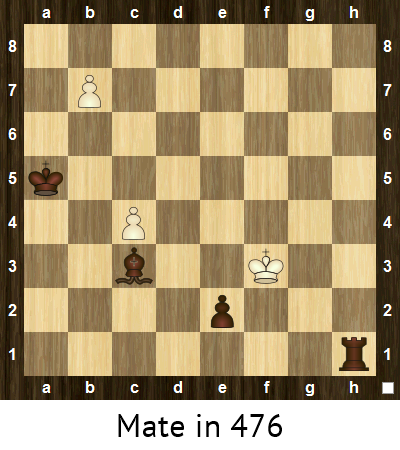 First, we should note that the closest competitors to the KRBN-KQN ending (and its derivates) fall far behind. KBNP-KBP and KNNP-KRB, ranking 9th and 10th, only give us 346 until mates. After this, endings follow with minimal gaps. We will take a closer look at them in one of the next articles.

Many show interest in what is to expect from 8-man endings. First, take note that the longest 6-man mate took 262 moves (KRN-KNN). Moving to 7-man endings doubled this value. Second, 8-man tablebases include much more endings with both sides having relatively equal strength. All this gives us a strong hope to discover a mate in more than 1000 moves in one of 8-man endgames. Unfortunately the size of 7-man tablebases will be 100 times larger than size of 7-man tablebases. To fully compute them, one will need about 10 PB (10000 TB) of disk space and 50 TB of RAM. Only top 10 supercomputers can solve 8-man problem in 2014. So don't hold your breath expecting new breakthroughs too soon - the first 1000-move mate is unlikely to be found until 2020 when a part of a TOP100 supercomputer may be allowed to be used for solving this task.